This guide will guide you through the steps for making a home made reflow oven and saving yourself a couple thousand dollars. This oven will let you solder SMT components that cannot be soldered with a conventional soldering iron, such as BGA, QFN or other SMT components.

The materials for building the oven are the following:

Procedure:
First, you must open the oven by removing the screws and bypass the timer clock, leaving the oven set to the maximum power. This is shown in figure 1. 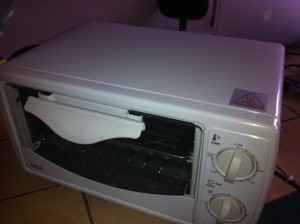 Second, you must put the end of the thermocouple inside the oven, so it can measure the temperature as near to the circuit as possible, as shown in figure 2.

Third, do the circuit shown in the schematic in figure 3 in a PCB or pre-perforated board. 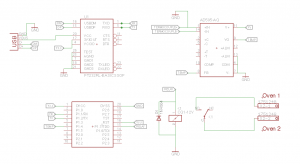 Fourth, cut on of the power wires (any but the yellow with green one, that’s the ground one) on the oven and run it through the connector labeled oven 1 and oven 2 on the schematic.

Program the MSP430G2553 (launchpad $4 in ti-store), with the code included in this blog. For using the oven for reflow, use the python code replacing the line

with the identity of your FTDI chip by doing “ls /dev/tty.*” on the terminal (MAC or linux).

After that, the code will be ready to be used for reflowing. Just set the temperature at which you want the oven and Voila, you are now reflowing. Soon we are going to upload a Visual C# application to make custom reflow profiles, so stay following Satelinx’s blog.